Our aim is to create an atmosphere of mutual respect, trust and responsibility. Positive behavior strategies are used in school and children are rewarded with a ‘STAR’ for their good behavior.

CHAPTER- I GENERAL RULES
a. Electronic Items
In keeping with the changing times and the growing needs of our young adults, the Dayanand Paradise allows possession of audio ‘i-pods’ Discmans, MP3 players, Digital cameras for students of grade 8th and above. However, these times must be registered with house parents on arrival at the school. These may be used only in houses at designated times. Any violation of these rules will attract penalties and the items will be confiscated. The school does not take responsibility for any such items which may be misplaced or stolen.
b. Monetary Transactions
Students are not allowed to have money in their possession. They have to hand over any cash they may have, to houseparent in a sealed envelope, with their name and amount written on it. Any other money will be considered illegal and will be confiscated.
c. Breaking Bounds
Students at all times are expected to stay within the designated school campus. Breaking bounds constitutes an offence and will invite a consequence.
d. Academic Practices
Integrity, honor and discipline should form the basis of all academic practices. The following acts of non-compliance / violation will invite consequences as deemed fit by relevant authorities:
• Plagiarism
• Not meeting deadlines for submission of assignments.
• Willful destruction of fellow students work, both academic and non-academic.
• Passing off fellow students work as one’s own.
• Using unfair means during examination. The person found copying and the one willfully aiding it will both be held responsible.
e. Language
Use of obscene language or profanities is not expected from students of the school.
f. Coercion
Forcing a fellow student to do things which violates their own space or the code of conduct of the school constitutes coercion. This will be viewed very seriously and dealt with accordingly.
g. Physical Violence
Students need to conduct themselves with dignity at all times. Physical violence violates a person. The school has zero tolerance for this.
h. Bullying
The act of bullying of intimidation goes against all tenets of socially accepted behaviour. Offenses of this nature are considered serious and there is zero tolerance for this.
i. Acts of Vandalism, Theft and Disruption
Students must respect school property. Vandalism and theft will not be tolerated. Offences of this nature are considered serious, and dealt with severely.
j. Library
The school library is open to all students of the school. All the classes are provided with at least one library period per week. Students have to observe the following rules:
1. Students are expected to maintain absolute silence in the library
2. Books other than reference books are issued for one week.
3. If the library books are returned late without a valid reason, the borrowing facility is withdrawn for two weeks.
4. Books damaged, marked or disfigured will have to be replaced or paid for by the borrower.
5. The library has open shelf system and students are expected to adhere to the order in which the books are arranged while picking them up or placing them back on different shelves. They must place the books properly on the racks after the consultation and not leave them on the tables.
6. Defacing, stealing of library books is an offence and will invite a consequence
k. Substance Use
The possession, consumption, dealing with alcohol or tobacco by students is a serious offence under the Indian law and will invite a serious consequence which will lead to immediate expulsion.

CHAPTER- II DRESS CODE
There is a uniform at the school, which requires neatness, modesty and standards generally accepted at educational institutions.

The dress code for various occasions is described below:
Classes: Prescribed school uniform.
Games: Prescribed school kit
Meditation Hall: White kurta pajamas, sandals.
Formal and special occasions: Appropriate formal attire for boys/girls or ‘Traditional Dress’ as prescribed by coordinator.
Trips: As indicated by school authorities.
When representing School within the city or outstation: uniform or as indicated by school authorities.
While returning from or going for vacations: School uniform
School outings: School uniform to be worn all times.

The houseparent will decide appropriateness of dress for school. Prefects and staff are responsible for enforcing the dress code and may ask students to return immediately to the BOARDING HOUSE or HOME to change.*

CHAPTER- III BOARDING HOUSE RULES
i. House Parent’s Access: House parents have access to student’s rooms at all times for purpose of monitoring. The school authorities have the right to conduct searches and check the belongings of students.
ii. Locking Doors: Students should not lock doors from the inside when in the room.
iii. Cleanliness: Students are expected to keep their living area and its surroundings neat, clean and tidy.
iv. Dormitory Visitors: Students visiting dorms area in which they do not reside can do so only with prior permission of the concerned houseparent or hotel warden.
v. Letter Writing: Scholars are encouraged to write a letter to his parents every Sunday. This will help improve the writing skills of Scholars.
vi. Phone Calls: Parents can speak to their wards on Saturday & Sundays as per schedule informed to them. No telephone calls on any other days will be allowed except in case of an emergency.
Timings
Saturday: 8:00pm – 9:00 pm.
Sunday or Holiday: 2:00 pm – 6:00pm
This facility is provided only to parents or grandparents and not to friends/relatives. Only one phone call per seven days will be answered.
vii. Property Damage: Compensation for any kind of damage to the school property by a student will be charged to the student’s ‘Pocket Money’.
viii. The school will take all possible care for physical fitness of the students. However, the school does not accept any responsibility, legal or otherwise, for accidents or mishaps. The school will remain indemnified against any claim on this ground.

CHAPTER- IV DAILY ROUTINE
All students are required to participate in the daily routine as indicated in the yearly calendar. Prior sanction by the relevant authority is required for any kind of absence.

Specific Daily Routine Guidelines
1. Attending all school activities, and on time.
2. Fulfilling all academic requirements adequately and to the best of one’s abilities.
3. Not going to dormitories during school time without permission of principal and house parent.
4. Regular participation in hobbies.
5. Presence at all school functions.
6. No absenteeism from examinations without permission from Principal.

CHAPTER-V DISCIPLINARY RESPONSES
The purpose of the disciplinary policy at the school is to ensure high safety standards and personal growth of students. Recognition that students tend to respond differently, the policy allows for variable consequence within the frame of reference. The objective is to help students reflect, take responsibility and change behavior.
Repeated violation of the same disciplinary infraction will be considered disobedience. This defiance in accepting correction for having poor choices will result in more severe disciplinary action.

DISCIPLINARY CONSEQUENCES
The consequences are based on the recommendation of the committee and the severity of the violation. These may include but are not limited to any of the following:
• Counseling followed by a letter of apology.
• Work assignment: Written self-reflection on topics that will raise a student’s knowledge or ethical awareness.
• Community service and social welfare.
• Writing a letter of apology to parent, staff and other student stating what the misbehavior was, why it happened, what has been learned and what will be done to change the behaviour.
• Cancellation of outing for the term/year.
• Forfeiting the right to participate in house/school activities or representing School.
• Writing letter to home – informing parents of the situation.
• School authority telephones the students’ parents and seeks a meeting with them.
• Suspension and student to be sent home.
• Parents to withdraw the student.
• The student to be expelled.
Addition consequences may also be included at the discretion of the school.

The Code of conduct is aimed at creating a harmonious community, for which self-discipline is vital. Hence, apart from what is mentioned in the code, rules and regulation communicated by the School from time to time need to be adhered to. 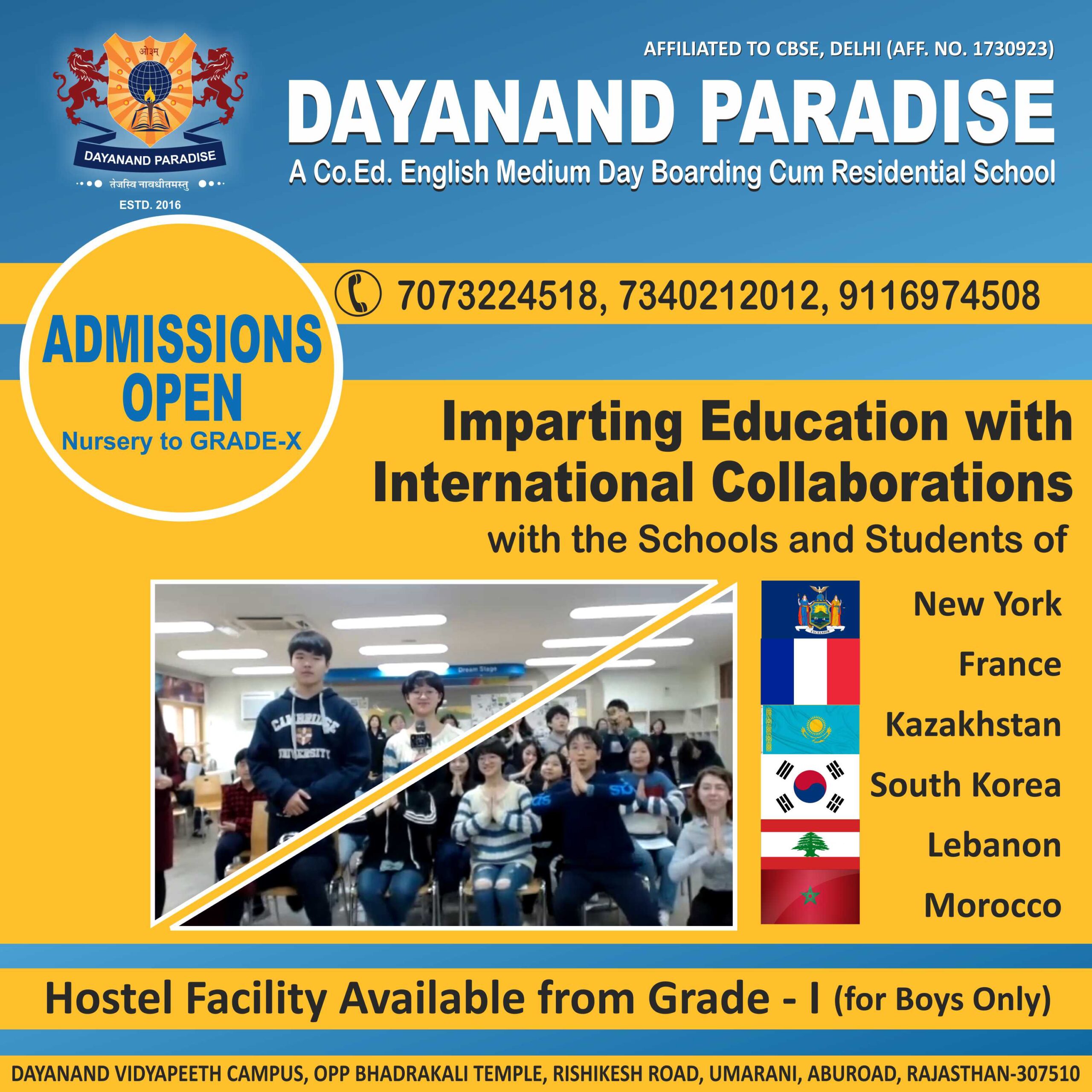